While most people are familiar with cavities, cavitations—holes in the jawbone created by extracted teeth not healing properly—can trap bacteria, toxins and other debris. Also known by the technical term osteonecrosis of the bone, cavitations often go undetected and lead to a host of underlying health issues. 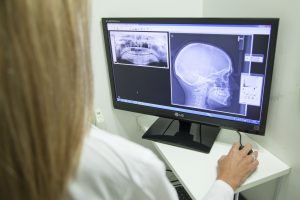 Dr. Joan Sefcik is a doctor of dental surgery who specializes in biological dentistry, a form of dentistry that recognizes oral and dental health can influence other disease processes in the body. She has been treating cavitations for 15 years. Sefcik says that in addition to extractions, cavitations can also occur around root canals.

“If the tooth is extracted and the socket isn’t clean enough, there’s still bacteria present, along with an abscess that won’t heal,” she explains. “Or, if the dentist used epinephrine (a vasoconstrictor added to the anesthetic to make it last longer), which most conventional dentists do, that can constrict blood, and the bone starts to die.” Biological dentists such as Sefcik do not use epinephrine because they are aware of how it can adversely affect healing of the jawbone after extractions.

Sefcik says the majority of cavitations show no symptoms in the mouth, and often there is no pain, but symptoms can show up elsewhere in the body. “All of the teeth in the mouth go to different acupuncture meridians, or energy paths. For example, wisdom teeth lead to the heart and the small intestines, so you can have problems with your heart or in the small intestines because of cavitations,” she believes.

Cavitations are detected on dental X-rays, and biological dentists can also trace a patient’s physical symptoms of cavitations. Once discovered, the dentist will surgically clean out the pocket, removing all of the bacteria and toxins. “A cavitation is the perfect little place for bacteria to hide because it’s an ischemic lesion, which means it that has no blood flowing to the area, and antibiotics can’t reach it,” describes Sefcik. “Meanwhile, the bacteria are having a heyday in there, and those toxins are oozing into the rest of the body.”

After cleaning out the cavitation, Sefcik will also let the area bleed a bit to purge the bacteria. “The cavitation has been an ischemic area, so you want the blood to go in there and flush it out,” she says. She wraps up the process with an ozone treatment to kill any additional bacteria, and the area is then surgically closed.

Sefcik advises that to avoid cavitations, patients should make sure their dentist does not use epinephrine during tooth extractions. They should also ask their dentist to clean the dead bone out of the ligament to avoid an abscess. “Usually you can’t feel cavitations, but if you have any kind of chronic autoimmune disease or cancer, it’s a good idea to check for cavitations. They can hold toxins and bacteria, which is another burden that can keep your body from healing,” she says. “Your body is programmed to heal itself, and everything in the body is connected.”

Click the image above to learn just what kind of impact root canal teeth can have on your overall health and well-being through one man’s journey from health to illness to health.