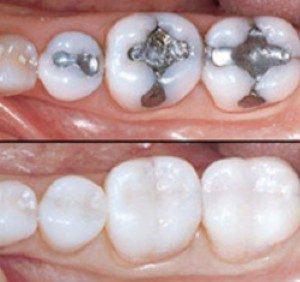 Although you hear them called “silver” fillings, the alloy used to make them is mostly mercury, along with smaller amounts of silver, copper, tin, and zinc.

Mercury is one of the most toxic elements on Earth.

Mercury is also consistently released from amalgam fillings. With every bite and swallow, some of this toxin is outgassed and inhaled. Brought into the lungs, the mercury is then introduced to the general circulation, where it gravitates toward organs such as the liver, kidneys, and especially the brain.

Mercury is also more dangerous in its methylated form. Science has shown that mercury released from so-called “silver” fillings (which are actually about 50% mercury) actually can become methylated in the mouth through interaction with saliva, as well as in the organs where it accumulates – just as it does in the fish we’re warned not to eat due to its methylmercury content.

Mercury has been linked with a wide range of systemic health issues, including autoimmune and neurological disorders, Alzheimer’s and other cognitive and mental health disorders, and gastrointestinal disorders.

Because of its toxicity, we do not use amalgam in our office. Nor do we polish any amalgams that are in our patients’ mouths.

When patients ask us to remove their amalgams and replace them with biocompatible alternatives, we follow the IABDM’s PROTECT Protocol for the safe removal of mercury fillings. Here’s what that entails:

After removal, proper detox is crucial to clear the body of all the mercury that has accumulated over the years throughout the body’s tissues. Because of this, we work closely with a number of naturopathic physicians and other integrative practitioners in the Greater Austin area to support your healing through and after your dental procedures.

Click the image above to learn just what kind of impact root canal teeth can have on your overall health and well-being through one man’s journey from health to illness to health.